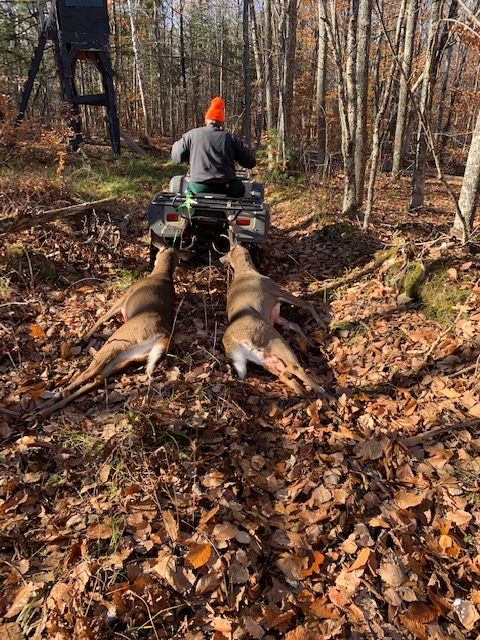 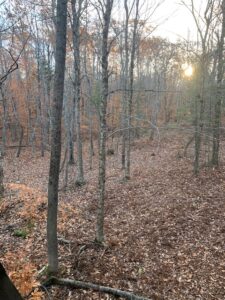 It was 21 degrees when we headed into the woods. I just needed a deer to complete my grand slam. I had a doe tag and was eager to get into my stand. The leaves were crunchy with frost but the woods were calm.  I climbed into the Sky Condo and waited for the world to awaken.  Almost immediately, animals started moving.  I sat perfectly still, my breath hidden by my green fleece balaclava.  It was almost an hour before I could see well enough into the woods to know if I was hearing deer or squirrels (it was squirrels).

A deer blew from the end of the field.  Something must have spooked it.  The neighbor? I knew that if I was going to change seats, this would be the time.  Nothing had come into the field.  I grabbed my gear and walked as slowly as I could to the next stand.  It wasn’t far, but it was tucked into the woods enough that I might catch a deer crossing an old skidder trail.

Taking a deep breath, I sat down and sent Dad a quick text to let him know which stand I was in. He replied to keep an eye out for 4 does that he had jumped.  I had a doe tag.  I was ready and on alert.

The more you hunt, the better you get at instinctively knowing the sound of walking vs scurrying. Something was walking at me. I grabbed the gun and swung 90 degrees to my right. I rested my arm on the edge of the stand. The corner post prevented me from moving further to the right.  I searched for the cause of the noise. It startled me when I found it; the brown body of a deer. My movement had stopped it.  There was a tree blocking me from seeing it’s head, and blocking it from seeing me. I leaned back slowly, pulling the gun with me until the barrel was back inside the stand.  I pivoted slowly and lowered the gun out the back door of the stand.

I lifted the scope and found the arch of the deer’s shoulder.  I was at an angle that was not ideal.  I could hit the vitals but I could also hit guts.  I placed the crosshairs more forward than I would have liked and squeezed the trigger.  I watched him run into a bunch of thick saplings. The beach trees still held their light brown leaves and I struggled to see him.  Then, he appeared at the end of a shooting lane.  He was on his feet and his tail was flickering.  I reloaded my gun.  He staggered to his left and appeared to fall but I wasn’t sure.  I sat and listened. Leaves rustled.  I wanted things to be quiet.  More rustling.

I stayed in my stand, watching and listening.  Suddenly, the woods seemed to erupt with action.  A deer ran by the end of another shooting lane.  Another deer was blowing and running away from me.  A gun shot rang out.  There would be two tags punched.

Dad appeared behind me.  I climbed down to meet him.  There was a deer blowing as it ran away from us. 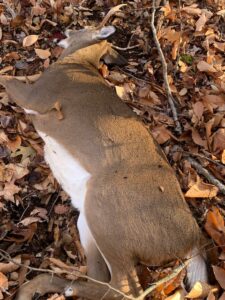 We started walking from where I shot the deer to where I saw him run.  I found blood.  A steady path of blood.  “He’s right here” Dad said. With a smile, he gave me a big hug, “You did it!”

Dad left to get the four wheeler and I found his buck (it dropped where it had stood) and dragged it closer to where mine was.  I stood in the woods alone and tried to comprehend what I had accomplished.  In two months and three days, I had shot a deer, turkey, moose and bear.  I had completed my grand slam!

Nurturing a Love of Nature

In the past twelve months, I've been a homeschooling teacher (temporarily), figured out how to work from home full-time and maintained a stable supply of toilet paper. We went from being out and about in the community to everyone at home. It was a lot! But one of the...
Read More

I had called Dad mid-week to check in and he told me that we had a big buck by the Sky CondoOne of the 8's? I eagerly asked No. Bigger If I could have driven up that night, I would have.  But I had to wait until Friday to put the memory cards into the computer...
Read More

After being in the audience of thetownhall debate on changing the way the Maine Department of Inland Fisheries and Wildlife (IFW) manages our bear populations, I was determined to interview Judy Camuso.  It was Judy's knowledge, passion and drive that came...
Read More