The temp was 102 at 3 o’clock in the afternoon.  Yes, 102.  Dad and I were melting but we had put this off for way too long. Here is was July and our trail cameras were not up and because they weren’t, we were not seeing what sort of animals are around our hunting areas. 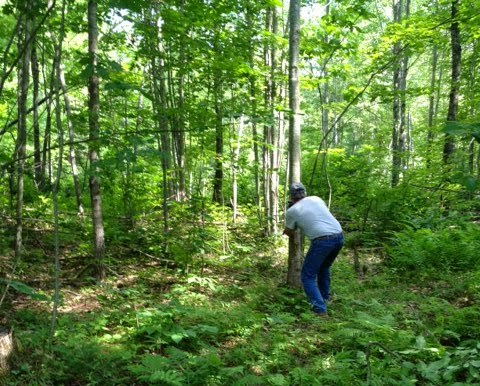 We put up three cameras.  Two by the Sky Condo (the above shot is a panoramic from the bottom of the SC) and one by my tree seat.  For the first time in a long time, I was able to bathe in deet in order to prevent the ticks from finding me – as well as the mosquitoes and black flies.

It was hot, we were sweaty and I stunk from all of the bug dope but it was fun.  It is weird how different the woods look in the middle of the summer compared to the middle of the fall and after the first frost.  Our path from the Sky Condo to the tree seat was totally changed with huge undergrowth that we had to bush wack through.  It helped that there were lots of deer (and deer tracks) that had taken the same trail and helped to beat down the growth but on our way back to the car, we got off of the main trail and had to side step a little to get back to where we needed to be.

The best part, along with seeing all kinds of tracks – even a few good sized tracks- was that dad jumped a deer while putting up the third camera.  It is always good to see the animal you are looking for.  I didn’t know what deer did when it was this hot out.  Moose go into the water but I don’t think deer do.  Maybe they just hang around in watery areas or bed down? 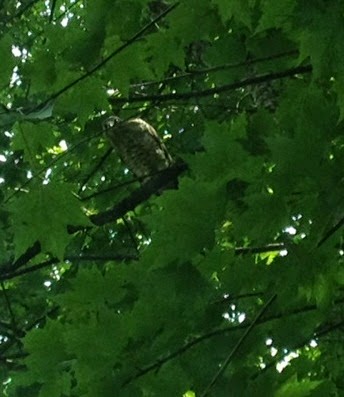 With the cameras up, we headed home.  On the drive out, a hawk flew into the tree on the side of the road.  He stared down at us and allowed me to get a few photos of him in before he took off again.

Let me just say that with the cameras up, I can not wait for deer season.  I can’t wait to see what pictures we get and then… That first morning in the woods, the crisp air and Dad by my side.  It is his turn to shoot a deer this season but we will see how the season goes.  Maybe we will get two for the first time ever.

← On hunting bears in Maine Struggles of a new outdoors mom →

My friend George Smith publicly announced that he had been diagnosed with ALS early this year.  When he told me in late last summer, I was shocked and saddened. I can’t imagine the Maine outdoors without George in it.