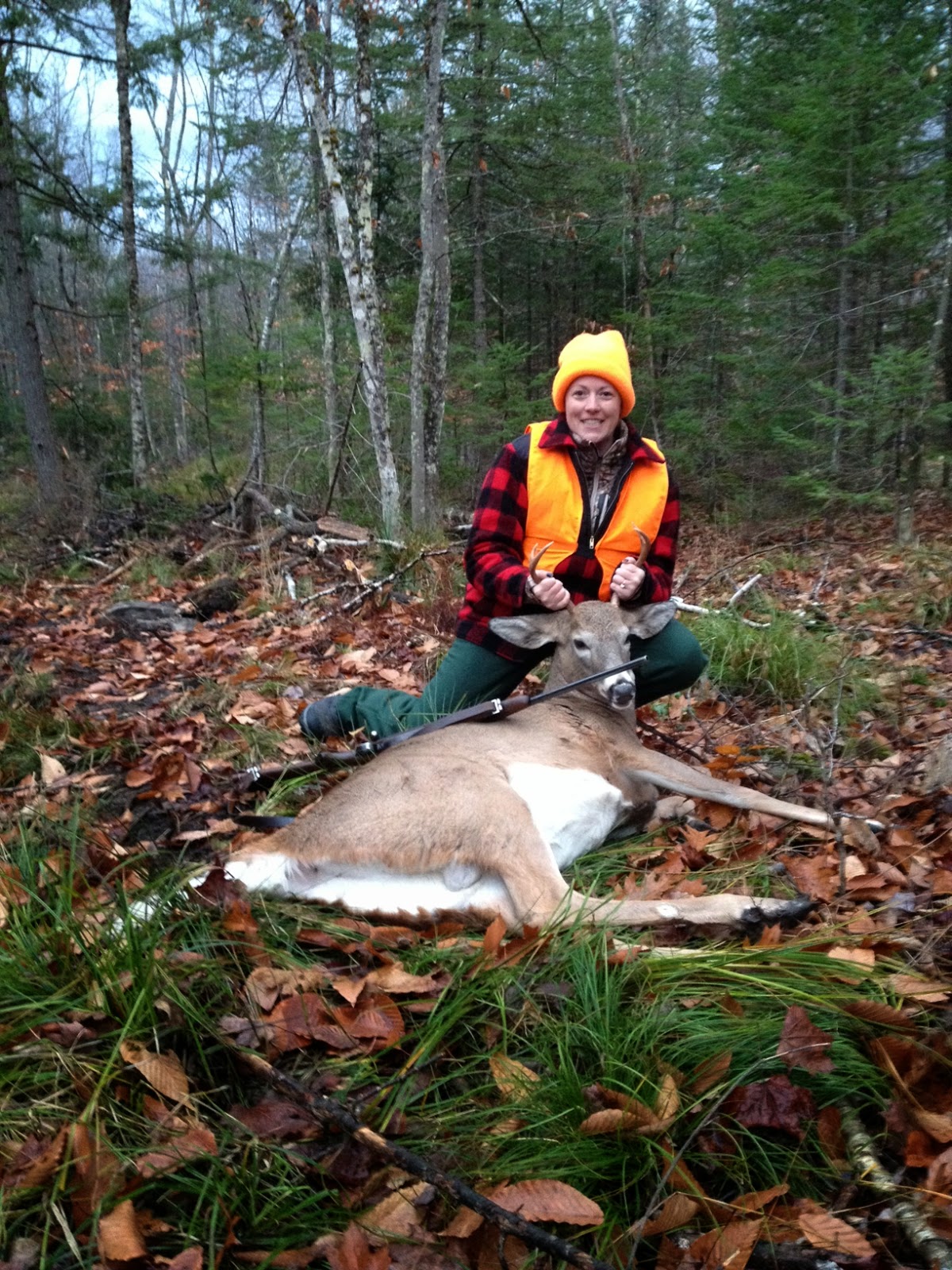 As I walked into the woods with Dad, I noticed many more posted signs than in previous years.  And more than what had been there even two weeks before.  No one had signed them but they were clearly on the property next to ours.  We walked along the property line towards my treeseat.  It was raining hard enough so that I could see the drops flash in front of my headlight but I was in my wool pants and coat so I knew that I should be OK for the five hour sit that I had planned.

Dad waited until I had climbed up, got situated and clicked off my headlamp (it was a new purchase that I had made when I decided to go bear hunting and it was very useful now as we walked into the dark woods.)  I settled in and waited for day light to break on opening day of deer season!

I wasn’t going to sit in this spot.  I had planned to be in the Sky Condo but after viewing the latest trail cam photos and seeing that 8-pointer make his first daylight appearance on Thursday morning, I decided to switch up my strategy.  And here I was.  Sitting in the rain, watching the light slowing come up and preparing for the new season.

Something moved off to my right and it took me a second to realize that it was – a flashlight! Someone was walking down the trail and coming towards me.  They were about 20 feet away when I flashed on my headlight.  I did not want some random hunter coming onto our property!

“You’re on my property!” he yelled at me

“No.  My Dad owns this land” I answered back.

“Well… I own this property and I don’t want to hear you shooting down here.” He instructed me.

I didn’t respond.  I was livid. I switched off my headlamp and sat there watching him make his way down the line of posted signs and into the woods, out of my sight.  I checked the time.  6:41am.  Legal time was 6:43am.  This jerk had blown it for me.  At the perfect time when deer start moving around, here was this guy walking through the woods and yelling at me.  Any deer nearby would have heard us.  My hunt was ruined.  I was furious.  Right then and there, I decided to shoot any legal deer that I saw.  I didn’t care about waiting to get that 8-pointer, I was too mad after being told not to shoot anything.

I moved around a little in my seat.  I mean, why not? I clearly didn’t need to worry about startling a deer.  I thought about getting down and walking to the Sky Condo to sit there with Hubby.  There was no point in me sitting here for the next five hours.  I was so mad!  How unsportsmanlike.  This was hunter harassment.  I was on my property!  If he truly owned the property and had put up the posted signs, he would have seen my seat in the tree – there was a new posted sign about 10 feet away from it.  And my seat been there for weeks now.

My train of thought was broken by movement off to my left.  I saw an eye, then a head.  A deer!  It looked like a doe. Figures! (Only Dad has a doe permit this year).  Then I saw antlers.  I clicked off the safety to my gun and got in position.  I aimed into a clearing that Dad had made over the summer and waited.  This deer was in no hurry.  He was walking through the woods with his head down, slow and easy.  When he walked into the clearing, I made a bleat noise and squeezed the trigger, dropping him in his place.  It was 7:14am.

I called Dad, who had heard the shot, knew it was me and was on his way.  I sent a text to Hubby to say that yes, that was me and that he should stay put in case another deer was passing through.  Then I made the traditional calls to my Mom and Grammie.

I was still mad about getting yelled at.  I half expected this guy to come back out of the woods and yell at me again for firing my gun. He knew that I had shot and assuming that he would trespass on my land to see if he could find evidence, we left him the gut pile.

It was a family affair to get my deer out.  Dad and Hubby helped drag him out to the field and Grampa brought the tractor down to finish the job.  We tagged and weighed my deer – a nice 150lb crotch-horn – and got him hung up and ready to be butchered.

I am a little sad that my deer season is over already but I will still go out and be the photographer for Hubby and Dad as well as look for the coyotes that we know are around.

I am extremely excited and proud about the fact that in the past three weeks, our freezer went from empty to filled with bear meat and deer meat.  For me, that is one of the best things about hunting.

That is our mentality as we drag that target outside each weekend and measure out distance in the snow. For three years, I have been after this huge buckand he has stayed nocturnal.  After this past rifle season ended and Dad stayed in the woods with his muzzle...
Read More

What I learned about being a hunting mom